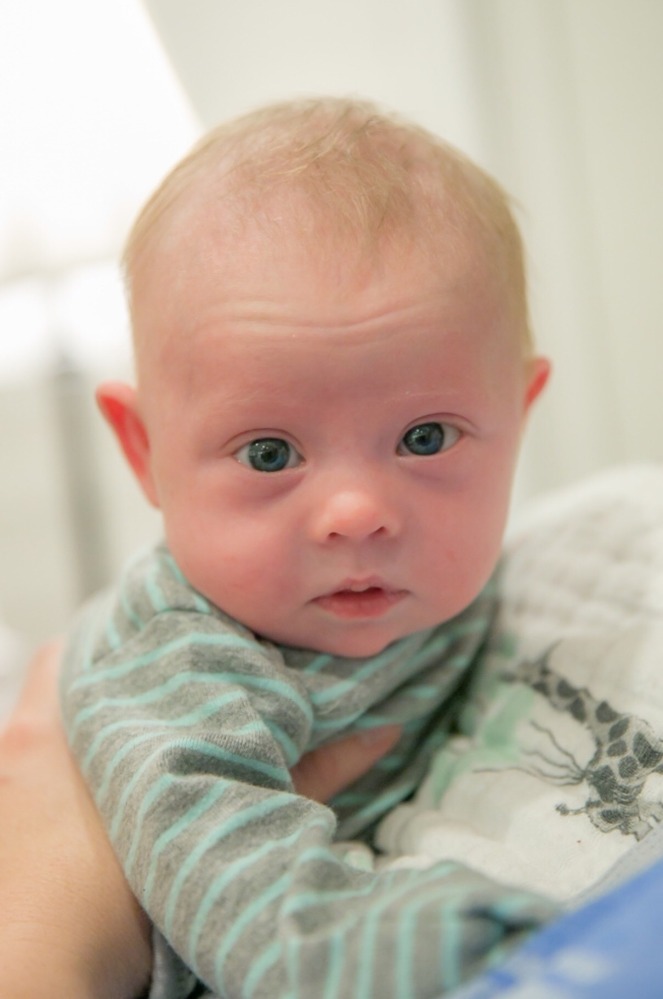 My sweet Thomas! Thomas Ezra was born October 12th, 2018. After an extremely hard pregnancy I was so ready for him to be here! I went to the hospital at 11pm on the 11th to be induced. Expecting, as a first time mom, to have a long labor we let our families know we had arrived and we’d let them know as soon as stuff started happening!

I was put on pitocin to start my induction and I was, also, given several rounds of penicillin because I was Group B Strep positive. No big deal, the penicillin will take care of it. Tried my hardest to get a little bit of sleep because I knew my sweet baby would be here soon!

8am rolls around and my OBGYN came and broke my water. I was at maybe 4cm (I had entered the hospital at 3cm!) Still being told by multiple people to just get comfortable, I was going to be laboring for a while. Soon after my doctor broke my water I asked my nurse if I could labor in the tub. I was hoping it’d make it more comfortable for me as my contractions were becoming closer together and more intense. Laboring in the tub meant no “active” IV’s. The nurse disconnected me from the pitocin and I was not allowed an epidural until I was no longer in the tub.

I got in the tub around 10am and labored in the warm water for about an hour/hour and a half before my child’s head pushed so much on my bladder I had to get out to pee. At this point I was feeling these contractions! They were getting so intense I was having to pace myself to get to the bathroom, 15 steps away. After I used the restroom I got back into the bed and tried to start those breathing exercises you see in the movies and you get told about in the birth classes. Yea, didn’t help! My nurse came in and saw that I was obviously very uncomfortable. I had started crying and hyperventilating a bit because everything was just becoming so intense! She gave me two options because I had asked for an epidural. Option one: go ahead and have her check my progress before the epidural, just in case the epidural slowed my labor we wanted to know where I was at. Option two: wait for the epidural before she checked my progress because I was in an immense amount of pain and obviously having a cervical check during contractions is not at all pleasant!

I went with option one… I figured I was already in pain, what’s a little bit more to check my progress. (Enter distressed face here!) But, she checked and I had progressed to a 7! In an hour and a half!! It was about to be game time and this little boy was coming faster than we anticipated! Soon after she checked my progress the anesthesiologist entered to start my epidural. Ladies, let me tell you, the worst part is the numbing pinch and the having to hold still during the contractions. Although, he did have to pull out and “re-thread” the catheter in my back because it started to veer a bit in the wrong direction. (Cue foreshadowing…)

After the anesthesiologist left the epidural kicked in pretty quickly! I went from crying to starting to fall asleep because I was absolutely EXHAUSTED! I had just started getting comfortable when I started feeling that pressure. You know that feeling, mommas. The one where you feel like if you so much as sneeze your child will shoot out of you across the room. We called the nurses in and they immediately started setting everything up.

The time was about noon when the nurse broke the bed away and pulled the stirrups out. Go time! Thomas was ready to come and it was just a matter of how strongly I could push with being so numb. Nurse told me to get ready and we were going to start “practice pushes”. What you don’t get told is that “practice pushing” can take HOURS! For a variety of reasons. My practice pushing lasted about three hours. Although, an hour out of those three hours was a “break” as my epidural had started to wear off on my left side and I could no longer focus on pushing and getting my son out. Instead I was writhing in pain because I could feel every contraction going down my left leg. It was miserable!

After the hour break, I “practice pushed” for about another hour. My mom lovingly stayed and got pictures for me as Thomas’s head began to crown! It was so interesting to reach down and feel his hair! I knew during my pregnancy he’d have a lot, every ultrasound tech I had pointed out his hair floating on the ultrasounds! What I was surprised to learn was that all of his hair was BLONDE! I thought for sure he’d come out with jet black hair like I had! He did not, but I still love his little fuzz head!

It wasn’t long before my doctor arrived back at the hospital. I was told by the nurse, if he hadn’t arrived when he did the nurse would’ve had to deliver Thomas. I was one contraction away from him being here and as soon as my doctor gowned up I pushed about three times in one really long contraction and Thomas was here!!

Finally! Finally, my baby boy was here! But, something wasn’t right. He wasn’t crying. He was purple and not breathing. The nurses took him to the little PANDA station in the room to start working on him breathing. They had to do some chest compressions to get him to “wake up”. They told me that because he was in the birth canal for so long he was born in shock and just needed a little bit of help. They wrapped him up in a swaddle and put a cap on his little head and let me give him a kiss before they took him to transition to monitor him.

Within an hour of Thomas being away and in transition a neonatalogist came to visit me. This was unexpected but I assumed it was just to let us know how he was doing and explain why he was in the transition unit. It was not that. The neonatalogist sat down and said, “We need to talk about something.”

“We think your son has Down Syndrome,” he said. “He’s showing some markers that indicate Down Syndrome. We will need to confirm with a blood test, but we just want you to be aware.”

How?? How is this possible?? I had had prenatal genetics done, and those results came back 99.6% accurate that he didn’t have any trisomy disorders. How could tests be so wrong??

We asked what the markers were that he was showing signs of. Upward slanted eyes, abnormal ears, off-center hair swirl, tongue thrust, thickening of the nuchal fold on the back of the neck. That was the answer he gave us. We said okay. He asked if we had any questions, we didn’t, I just wanted to know when I could see him. The doctor told me I could see him as soon as a nurse was available to take me to the nursery. He left.

My mom and I cried for a bit. Joey wasn’t there with us when we were told, my dad had taken him to get something to eat. We just didn’t understand why we didn’t know previously he would be born with Down Syndrome. We don’t and would never love him any less. He is our absolute World! It was all just very confusing.

As confused and upset as I was, when I finally got to see and hold him, my whole life changed. He was so tiny and perfect, no matter what that doctor told us, he was absolutely beautiful! His big blue eyes, beautiful blonde hair, and now that he can smile, his perfect, infectious smile. It is so amazing, and just such a gift to be his Momma. I’m so grateful that God chose me and gave him to me.

My silly, sweet boy is almost five months old, and he just keeps getting better and better! He’s smart and can mimic some sounds he hears now! Mostly it’s the noise of blowing “raspberries” or spitting his tongue out at you! He smiles and giggles when you speak to him and he adores when people tell him how cute he is and how much we love him!

I could not imagine my life without him in it any more. I pray that he will always remain this happy and will love discovering new things each day, because my family sure does enjoy watching him learn and grow!

Thomas’s new discovery, himself in the mirror!!

I hope you enjoyed this introduction and FIRST OFFICIAL POST on my blog!

Happy Easter everyone, from my family to yours ❤️
Happy Down syndrome awareness month, friends!! It’s that beautiful time where we all get to show off our beautiful babies! As Thomas turns 2 this month, we’ll be showing our favorite facts about Down syndrome and some of our favorite things created by people in our community!! We thought the perfect start to this month would be a kiss from Thomas!!
I haven’t updated on Thomas in while, but we’ve hit a BIG milestone!!! He’s walking now! About 90% of his mobility is now walking around or trying to run, which is incredible! Always so so proud of this amazing little boy💙💛
By far the best view I could’ve asked for! 🤩😍 Thanking my sweet husband 1000x today for this spontaneous day trip!
Hi guys! Go check out the fundraiser in my bio! You can get socks from @palssocks to help support @thedsdn and us for World Down Syndrome Day! Pals has some of the cutest crazy socks for sale!!! You only have until February 29th to order!!
This sweet little nugget has his tonsils removed last week to help with his sleep apnea. Poor little fella has been feeling something awful ever since! Hoping he’ll be on the mend soon! ❤️